Screen Time is Apple’s take on the growing trend of operating system level features that help you discover how you are really spending your time with your digital devices. These features and metrics provide you the baseline information to understand where your time is going, and give you the power to make changes to your habits. You are in control of how you use your device, and Screen Time, like Android’s Digital Wellbeing, will not inherently force you to act in a certain way. The tools can shape your behavior, but it is not Apple or Google prescribing how you should use your time. You are still the one making the choice to eat your vegetables.

So how does it work?

There are four main features (and one minor) under the “Screen Time” setting: Device Screen Time, App Limits, Downtime, Content Restrictions, and Bedtime.

Device screen time gives a detailed look at where you spend all your time on your Apple devices. You can see your daily and weekly usage trends, your most used apps, how often you pick up your device, and how many notifications you get.

In the last week, I’ve used my iPad for 10 hours and 45 minutes, with over and hour of that time coming during my defined device downtime. You can tell I spent some time organizing my calendar last weekend.

The average length of time per device “pickup” isn’t displayed (nor is most common amount of time), but a quick calculation given the weekly time spent and total pickups shows roughly 2 minutes and 45 seconds per interaction with my iPad. I’m wondering how this compares with others, and how many meaningful interaction people have with their devices in a day. Lowering the number of times we glance at the time or check for notifications could increase the average time, but is session length is not necessarily an indicator of time well spent.

It’s fun to see all this data, but there are no recommendations of how to use your device more intentionally. Apple lets you do all the analysis and any subsequent action you decide to take is entirely your decision.

Once you’ve decided you need to take action, App Limits let you reign in your usage of certain apps. 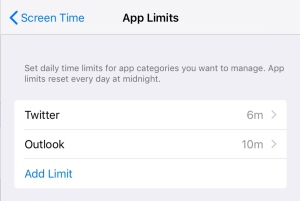 You can set limits for individual apps or categories of apps. 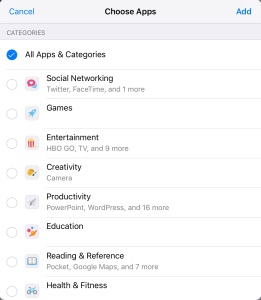 Apps will act the same way whether or not you have screen time limits enabled. While you have time remaining, you can keep using the app, but once time runs out, that’s it. No more for today. You can always go through the block, but Apple tallies up all the times you were bad.

Interestingly, because my time on Twitter and Outlook is a scarce resource, I now find myself using the entire time limit every day. Previously, I would only go on Twitter once or twice a week, but when I did, I found myself engrossed in the content for a while. I figured Twitter would be a prime candidate for trying the new app limits. I wasn’t wrong, but now, since I know I’ll only be there for at most five minutes, I find myself spending time on Twitter every day.

Downtime is the more interesting feature. While screen time limits are opt in for certain apps you think you use too much, Downtime is default opt out for every app on your device. Enable Downtime and you will be locked out of all your apps from the start to end time.

You can individually toggle on apps you want to use an app during downtime. This is a two part set up, first by enabling the Downtime setting, then returning to the Screen Time menu and selecting Always Allowed apps to select the apps available during Downtime.

This feature triggered the most significant, and positive, behavioral shift for me. I start Downtime a little while before I generally go to sleep, and end it a little after I generally wake up. I only enable apps where I most intentionally create and consume content. For me, this means I can read the articles I set aside for myself earlier in the day, and can write what’s on my mind. That’s it. (Phone, Messages, and FaceTime are also enabled by default). Since I installed the iOS 12 beta on my iPad, I’ve stopped watching YouTube hours on end before going to sleep, and I’ve stopped immediately checking notifications right after waking up. 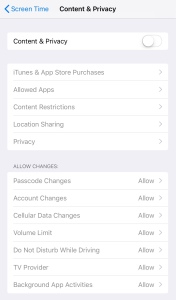 These are also under the Screen Time setting, but it feels like they were just moved here because they make sense in relation to the other settings . Nothing too interesting, but you can set a Screen Time passcode for your self if you really want to lock your self out of some apps.

Expanded “Do Not Disturb” settings with Bedtime mode 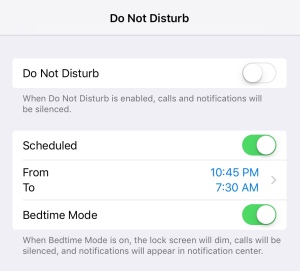 You should really create your own Bedtime mode using Downtime as I described above. The new Bedtime mode toggle under the Do Not Disturb Setting will dim the lock screen, silence calls, and send all notifications to notification center. It’s really only an extension on the existing Do Not Disturb mode. Nice to have, but not a major improvement compared to the other Screen Time features.

Not so final thoughts

Apple’s Screen Time features are available now in the iOS 12 public beta but you may just want to wait for the general release this fall before trying everything out (it’s telling I accidentally typed “bug” while trying to write “public” just then). Betas allow developers to fix issues in software before the official release, and running beta software can cause some headache when your main device does not work as expected.